Whose milkshake?: Wordy lessons from four song lyrics that annoy me 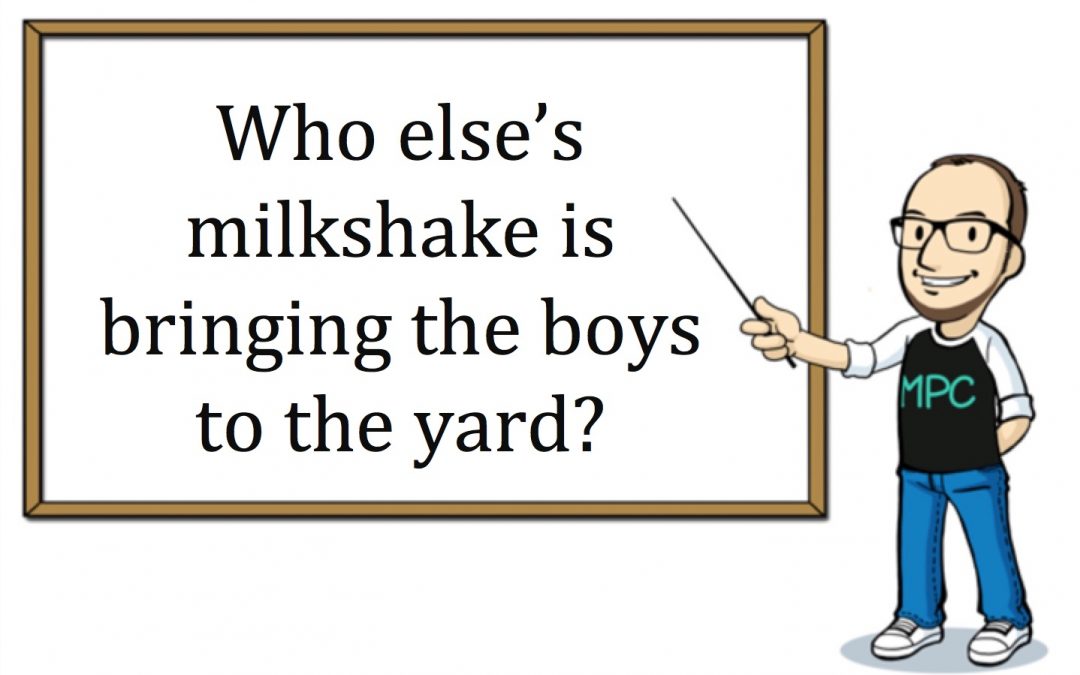 A writer colleague of mine, Emma, recently blogged about all the terrible grammar you can find in pop songs. It’s an amusing post and you should go read it right after you’re done here.

But I have this ability (I guess you could call it a gift) to be pretty unbothered by bad grammar and punctuation in informal writing. Songs, tweets, texts, graffiti – they all pretty much get a pass from me. As long as the writer’s message is still clear, that is.

But that doesn’t mean I never get annoyed by song lyrics for wordy reasons. Here are four examples of song lyrics that genuinely ruin my enjoyment of the songs themselves. And as with all writing criticism, it’s only useful if you learn something. So I’ll be dishing some wordy wisdom along the way.

I’m sorry – better than whose? Who is this mystery purveyor of sub-par milkshake? We can clearly see it’s the boys who, having recently arrived at the yard, are telling this person directly that Kelis has better milkshake. But there’s no indication of who they’re talking to.

In professional writing, I see this problem a lot in long, complicated sentences. Like this:

Our team managers have made encouraging steps in dealing with the client and they have informed their colleagues of their intentions to refrain from engaging in such practices in their company.

Remember when I blogged about ambiguity a few months back? Well the sentence above is just like the banana stealing monkey police – it could mean any number of different things because it’s not clear who they mean by ‘they’ and ‘their’.

The lesson: Always make it super clear who you’re talking about when you say ‘he’, ‘she’, ‘they’, ‘their’ or anything similar. If there’s the slightest whiff of ambiguity when you’re using one of these words, just replace it with the actual name of the person, place or organisation (the proper noun). And break up long sentences to make the whole thing much simpler.

If I was a sculptor / but then again, no / or a man who makes potions / in a travelling show

Man, this one does my head in. A self-correction (but then again, no) is something you do when you’re speaking off the top of your head. At a stretch, a self-correction can sound okay in a speech or a presentation, but only if you’re delivering it in a style that’s meant to sound non-scripted.

Elton John is not a freestyle rapper. He’s not firing off these sick rhymes in the heat of the moment, so a self-correction makes no sense at all. And the whole premise of this song is that it’s written to be someone’s ‘song’. You could maybe argue that it’s meant to be ‘quite simple’, but any idiot writing a song wouldn’t leave their own notes in the final copy.

And, and, and!… the line itself is hypothetical – ‘If I was a sculptor’. He’s not even unsure if he is a sculptor or not. He’s imagining being a sculptor, then he decides that metaphor’s a dead end and leaves the self-correction in there. Why? Why, Elton John?

Every medium of communication has different things that do and don’t work. For example, here’s a word-nerd joke that really doesn’t work when written down:

Last week, I’m going camping with my family. We’re not enjoying it much though – we always seem to use the wrong tense.

When spoken aloud, it’s still not a great joke but it works. It works because tents and tense are homonyms – they sound the same, so the punchline has a double meaning. But written down, you have to choose one, which blows the premise. The technique of communication is incompatible with the medium of communication.

In a song, you write the lyrics before you sing it. So a pre-written self-correction isn’t compatible with the medium of a song, and just sounds straight-up stoopid. (In my opinion.)

The lesson: Always keep in mind how your medium of communication relates to your communication style. Just because a particular technique works in one medium doesn’t mean it’ll work in another.

Edit: My fiancée has just informed me that while Elton John sang this song, it was actually Bernie Taupin who wrote it. But to my mind, that makes Elton the editor, so if anything he’s even more culpable.

3. The Drifters – Can I Take You Home, Little Girl?

I wouldn’t say this one really annoys me, as such. But it does make me cringe a bit. ‘Little girl’ just doesn’t mean the same thing now as it did in the 60s. Nowadays, these lyrics sound less like those of a waistcoat-clad gentleman on the dance floor, and more like those of a creepy old man sitting on a park bench.

So these lyrics didn’t age well. But that’s over a pretty long period of time. In these tweet-laden times, a single word or name’s connotations can change overnight – especially in culture, entertainment and sports.

I sometimes have to raise this concern with clients. If you’re trying to jazz up an unremarkable line by throwing in an offhand reference to Cristiano Ronaldo or Kim Kardashian’s butt or whoever, you’re taking a big risk – because those people’s names can easily come to mean different things very suddenly.

The lesson: Always be careful with culture, entertainment and sports references. Because once you’ve written them, you can’t control their meaning.

Why the hell else would you hide? Seriously. The second part of this line is totally redundant. It’s like saying ‘the man in me will eat sometimes, to keep from being hungry.’

I know this sounds like a super nit-picky criticism (because it is one). But rest assured, I still adore most of Bob Dylan’s music. Only rarely do I hear him sing a line that’s anything short of brilliant.

But this particular example is something I see a lot of in my day-to-day – stating the obvious. Extra words for the sake of extra words. Fluff. And when you’re writing several thousand words like this, it gives your reader extra work to do.

Don’t get me wrong, this isn’t the end of the world. But when you eliminate little bits of fluff like this from your writing, it can make a big difference. Here’s an exercise I often suggest to people who need to write a bit more directly: Look at the word count of what you’ve written. Then try to hack that word count down by a third, without losing any content.

When you suddenly have a limited number of words to work with, these idle, stating-the-obvious bits are usually the first things to go.

The lesson: Don’t state the obvious just for the sake of elongating a short sentence. Short sentences are fine. And adding needless words dilutes your writing and makes it a chore to read.