The banana stealing monkey police: All about ambiguity 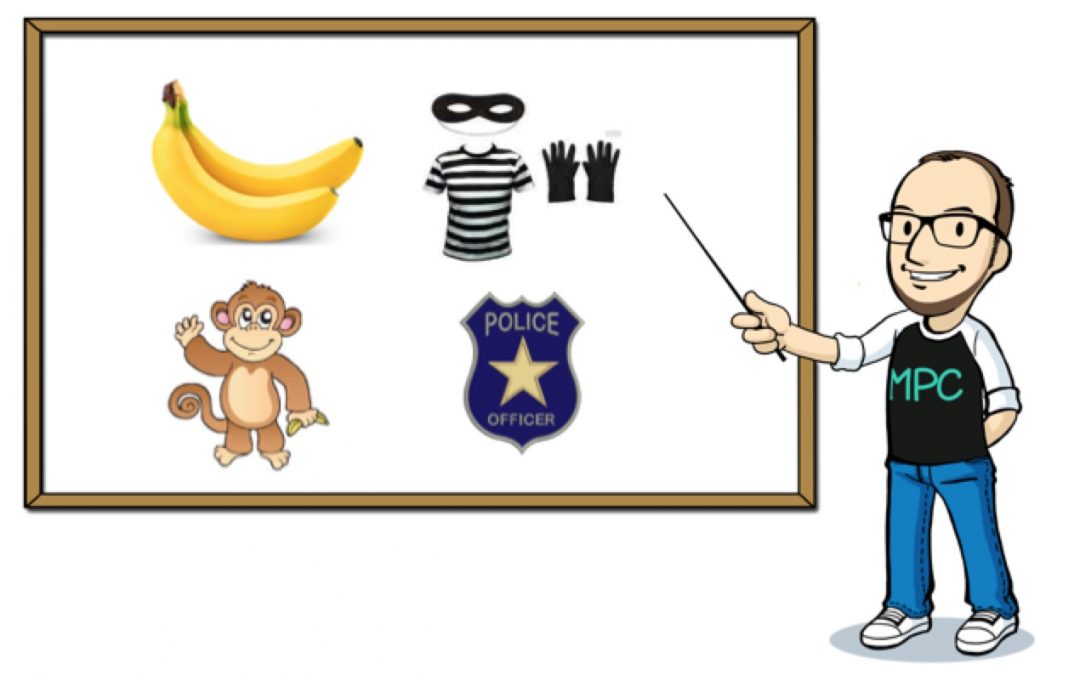 The number one most important thing about writing is to be clear in what you’re saying. And that means avoiding ambiguity. For a quick lesson on this, we’re gonna talk about the banana stealing monkey police.

Avoiding ambiguity mostly comes down to sentence structure. And understanding sentence structure usually means talking about syntax, clauses, modifiers, ‘diagramming’ sentences and all that boring mumbo-jumbo. So I’m gonna give you some practical advice on how to avoid ambiguity without getting bogged down in all that technical stuff.

So who are the banana stealing monkey police?

Are they a group of human cops who investigate banana theft by monkeys? Are they little monkeys in police uniforms who track down human banana thieves? Or are they human cops who walk a beat in monkey neighbourhoods, but are abusing their powers by stealing bananas from the very monkeys they’re sworn to protect?

Could they even be anthropomorphic bananas who investigate theft of monkeys? (Or in deed theft by monkeys.)

The banana stealing monkey police are my go-to example of ambiguity. So let’s look at some simple ways of removing ambiguity – in this and any other group of words.

A hyphen prompts your reader to think of two words as one. And that comes in very useful.

A hyphen can rule out a ‘bananas in pyjamas’-type scenario having anything to do with our monkeys. The hyphen in banana-stealing makes it very clear that whatever species we’re dealing with, it’s definitely the bananas that are being stolen.

You don’t need a complex understanding of syntax to know when words just aren’t in the right order. We learn this purely through experience and habit.

Think about a big, red bus. If someone pointed at the bus stop and said “look, there’s a red, big bus” it would sound odd. It’s still a perfectly valid sentence, grammatically, but it just doesn’t fit with the word order we’ve trained our brains to expect.

You can use these expectations to rule out ambiguity. Let’s say we’re describing little monkeys in police uniforms:

‘Monkey police’ would be a valid way of describing them, but that could just as easily be describing human cops who protect us from miscreant primates. But if you flip it around to ‘police monkeys’, that makes it very clear what side of the law these monkeys are on. In the same way we’d never refer to traffic cops ‘police traffics’, we just automatically know that a cop on monkey duty would never be called a police monkey.

‘Banana-stealing police monkeys’ is pretty damn similar to the phrase we started with. But it’s much less ambiguous.

In fact, we know exactly who the banana thieves are now – it’s definitely the monkeys. And they’re getting away with it too, because this wording gives no indication that they’re being policed by anyone. Internal affairs are completely in the dark on this one.

But this still isn’t completely unambiguous. We still don’t know if the police monkeys are animals used by the police (like police dogs) or if the monkeys are themselves the officers in command – uniforms, badges and all.

(A quick note about commas)

We could technically achieve a similar level of clarity by using a comma instead of reordering our words. If we said ‘banana-stealing, monkey police’, it would make ‘monkey’ read like a description, thus ruling out the possibility of the police being human. This would work in theory, but again, it wouldn’t quite sound right in practice, would it?

It’s when you’re writing a list that commas become super important in avoiding ambiguity. When we write a list that’s naturally unambiguous, we don’t put a comma before the ‘and’. But when a list is ambiguous, we often need one.

For example, if you said “I spent the weekend hanging out with my friends, cooking and cleaning” you’d come across as very lonely indeed.

This all ties into a big, overblown debate about the serial comma (or the ‘Oxford comma’). But you can spare yourself all of that by just remembering – if a list sounds ambiguous in any way, stick that extra comma in there, just to be safe.

If in doubt, unpack it into a full sentence

Despite all these (excellent) tips I’ve just given, sometimes a particular bundle of words is just so rife with ambiguity that you have to bring in more words to help you out.

There’s nothing wrong with this. At the start of this blog, I made it clear there were five or six different things we could mean by ‘banana stealing monkey police’. And I made those different meanings clear the only way I could – I unpacked them into sentences.

That’s not always necessary. This just happens to be an extreme example of a very ambiguous phrase. In fact, I can still think of a couple more interpretations we haven’t even mentioned:

So it all boils down to a simple rule for avoiding ambiguity:

If you can’t make your meaning crystal clear with hyphens, commas or reordering your words (or any combination of these), unpack it into a full sentence, just to be sure. mpc