The dress shop from spellchecker hell: A challenge for the grammar police 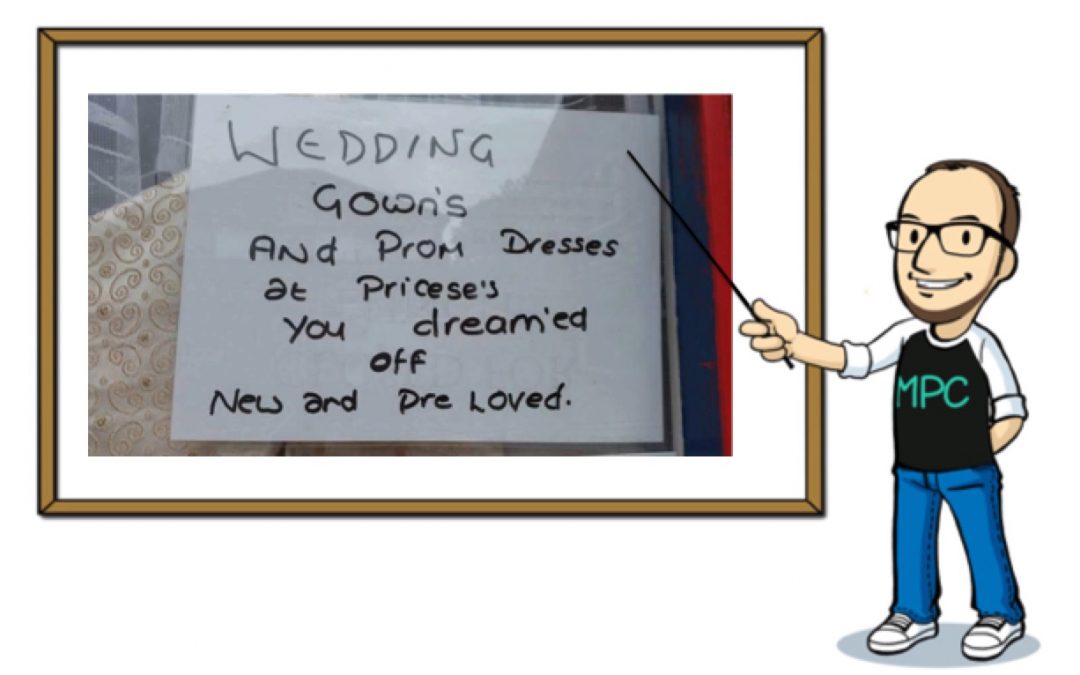 Let’s go right back to basics and try to answer a very simple question:

What is good writing?

After going for a long walk, scratching my chin and skimming stones across a lake at sunset, this is the best answer I can come up with:

Writing is good if it achieves exactly what its writer intended for it to achieve.

Usually, a piece of writing is trying to achieve one of these three things:

We could probably add ‘provoke’ to this list, as five minutes on Twitter will prove, but for now let’s focus on these three.

Good writing is good when its writer sets out to do one of these three things and duly nails it. A good piece of writing can inform, persuade and entertain – or any combination of the three.

That is, I reckon, a pretty hard to contest summary of what good writing is.

But we’re here to talk about the grammar police, and a piece of writing’s educational, persuasive and entertainment merits aren’t their chief concern. Which brings us to:

We’ve just answered the fundamental question of what makes good writing good, but we didn’t even fleetingly mention the importance of following the rules.

Surely for good writing to be good, the grammar police should be able to brandish their magnifying glasses and confirm that every last comma is in the correct location, right?

Well, kind of. This brings us to the difference between a hypercorrect writer and a good writer:

A hypercorrect writer sees spelling, punctuation and grammar as the main thing that determines how well they’re writing.

A good writer sees spelling, punctuation and grammar as a set of tools that help them pursue the main purpose of their writing.

Since we’re going back to basics in this blog, let’s take a second to think about what spelling, grammar and punctuation are actually for. What function do they serve?

Again, after some chin stroking and stone skimming, Here’s my best answer:

We’re designed to communicate by sound. We’ve been evolving and communicating for millions of years, but writing has only been around for thousands. So the written word works essentially like a phone call – you say something in one place, and the sound gets recreated in another place for the recipient to hear. When you read, your brain essentially converts what it reads into how it would sound if the writer was in the same room, speaking to you directly. And for that to work, you need to know where the pauses and intonations go.

When we speak we use pauses and intonations to make it clear what relationship each word has to the next word if we didnt do this it would be like this paragraph youre reading now our listener would struggle to understand where one sentence ends and the next one begins it wouldnt be completely indecipherable but youd be continually tripping up on the ambiguities sometimes these ambiguities would be bad enough that you genuinely couldnt be sure of whether the speaker was meaning one thing or another simply put it would be a massive pain in the ass.

And I’m pretty sure we can all agree that being able to speak clearly doesn’t automatically make you informative, persuasive or entertaining.

With that in mind:

Let’s get to the challenge

Are you the type of person who’s been known to write a simple ‘*their’ in the comments under a social media post you disagree with? Do you scowl whenever you hear someone say ‘advocado’ (with a D) or ‘expresso’ (with an X)?

If so, this next bit might ruin your day.

A couple of years ago, a friend of mine sent me a photo of a handwritten sign in the window of a dress shop. The sign said this:

WEDDING gown’s and prom dresses at pricese’s you dream’ed off New and pre loved.

When I first read this, I thought there was more than a whiff of the troll factor about it. I thought there’s no way anyone would actually put such a punctuation abomination in their store window – surely this is a setup designed to make language pedants spill hot coffee on their laps.

But I can’t find the photo anywhere else online (not even with a reverse image search) so, I’m sorry to report, it’s legit.

If so, here’s our challenge for you: Think of something this sign-writer has done well.

Can you think of anything?

Minimal credit where it’s due

We can see one thing this writer has done well: they’ve found an effective tone of voice.

First, let’s write ourselves a technically correct sign that gives the same message, but makes no effort to find a persuasive tone of voice:

A) Cheap dresses for sale. New and used.

B) WEDDING gown’s and prom dresses at pricese’s you dream’ed off New and pre loved.

Is either of these signs worthy of being labelled ‘good writing’? No, they’re both rubbish. But they’re rubbish for different reasons. And each one’s failure is the other’s strength. So between them, they have all the component parts of a fairly decent bit of writing.

Sign A has all its spelling, punctuation and grammar in the right places. Okay, so ultra-conservative grammar folk (including MS Word) may scowl at the second part being a ‘fragment’, but generally it’s following all of the rules. But it’s cold. It’s the type of sign you’d see by an amateur car dealer’s driveway. Few grammar police officers would take issue with it, but would they be compelled to step inside the store and check out the advertised dresses? Probably not.

Good ol’ sign B, bless its cotton socks, is a mess. But it’s kind of a charming mess, isn’t it? ‘Prices you dreamed of’ is a pretty naff choice of words (even when written correctly), but it’s personable, which makes it far better than ‘cheap’. Cheap implies an empty commodity – a purchase where quality doesn’t really matter and anything will do. Cheap petrol and cheap train tickets are highly desirable – cheap watches and cheap suits are not. The word ‘used’ has similar connotations.

Sign B’s literacy-limited writer understands that wedding gowns and prom dresses are sentimental purchases. And if you can’t afford to shell out thousands on Bond Street, you at least want a bit of romance in the process of choosing a dress.

Sign B calls its used dresses ‘pre-loved’ (albeit missing the hyphen), which is so much more persuasive. Okay, it’s not original – that term’s been around for ages. But choosing this term implies a sentimental value to the dresses. They’re not just empty commodities you have to settle for because you can’t afford an expensive dress. They’ve been cherished and cared for. If anything, they come imbued with an even greater sense of romance than dresses fresh out the factory.

Moral of the story incoming:

Good writing needs both. But if you slip into the trap of thinking your writing is ‘good’ just because MS Word doesn’t put any green or red squiggly lines on it, your writing probably won’t achieve what you want it to.

Which brings us to freestyling

Comedy writing and social media really show the people who see grammar and punctuation as tools and those who see them as rules.

Remember that show, Scrapheap Challenge? It’s the one where two teams race to build a makeshift speedboat, missile launcher or hovercraft using only the odds and ends they find on a scrapheap.

By the end of an episode, you have these crazy mechanical creations built from components performing functions totally different to what they were designed to do. But they work. (Usually.)

They work because the contestants don’t just understand what each component is designed for – they understand the universal mechanics of how it works and how to repurpose it into something new.

And you can totally do this with writing. I call it freestyling. It’s really effective and amusing when done well. Here are a couple of examples:

If Kanye is Joaquin Phoenixing us, I will shit my pants.

This made me laugh. The context isn’t massively important – Kanye West was in the news for doing something ridiculous, as he does. This tweeter thinks maybe he is just deliberately acting bizarrely as a setup for some kind of artistic project he has secretly in the works. (Just like Joaquin Phoenix did in 2008 for the film I’m Still Here.)

So in this tweet, we have a proper noun (Joaquin Phoenix), suffixed with an ‘ing’ and used as a verb. It’s not what proper nouns are designed to do, and it very much breaks ‘the rules’, but it works because the writer understands the universal mechanics behind it. Just like a jet ski made from planks of wood and a motorbike engine.

This comes from a book my fiancée gave me to help me understand the locals when I visit her in Liverpool. Apparently this saying is a threat of violence on Merseyside. The ‘daffs’, the book tells me, are a reference to the daffodils that would be displayed at a person’s impending funeral if they don’t heed the warning.

As you might expect, MS Word’s spellchecker absolutely hates this sentence – of the seven words it contains, four of them have a red squiggly line underneath. But it works. The writer understands how the words they write on the page will sound in the reader’s head. So those words don’t even need to be actual words you’d find in a dictionary. They follow the universal mechanics of written English, so they’re effective.

But it’s still okay to be irked by technical errors

It’s a good thing even. Technical correctness is important for effective writing. It’s just good to remember it’s not the only important thing.

This is just another case of language evolving quicker than some people are okay with. And even the most progressive writers of today still have their bugbears. I’ll happily admit that any time an American writes ‘I could care less’, I straight-up stop reading – because this person doesn’t deserve my attention until they can learn to FOLLOW THE RULES!!!

Oops. Like I said: no one’s completely immune to a bit of good ol’ grammar pedantry.