Some advice for Southern Rail on how to deliver bad news 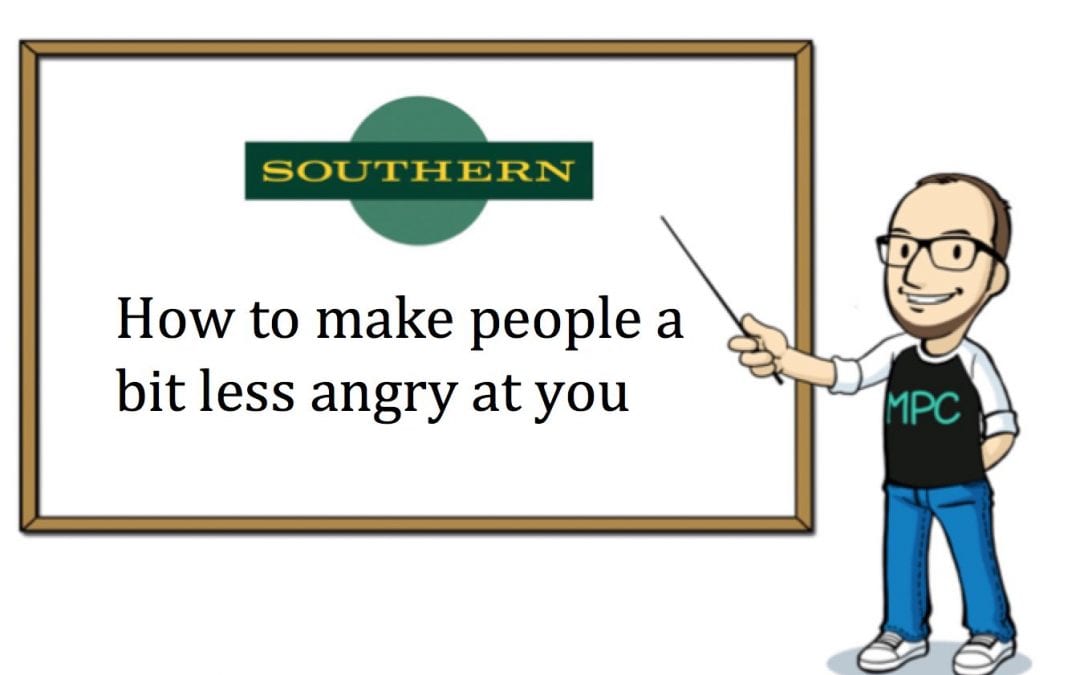 Obviously I can’t help you improve your trains or their punctuality. Considering Which has ranked you as the single worst train service in the UK three years in a row, and your ‘discover London’ ad on Twitter was met with an avalanche of memes that left no piss untaken, I’m guessing the problems there run pretty deep.

1. Lose the passive voice and take some responsibility

Oh, Southern Rail, why do you always write about bad news like it’s never anyone’s fault? Whenever there’s any risk of admitting fault you duck, dive and evade like a peregrine falcon in a pub full of his ex girlfriends. This tweet is a prime example of needless passive voice:

Skipping gracefully past the ‘vrew’ bit, what’s so scary about saying words like ‘we’ and ‘us’? People find it much easier to empathise when you talk about yourselves as a group of people doing their best, rather than a faceless business to which things just happen.

If you write with active phrasing it sounds much more like you’re taking responsibility and trying to be helpful. Like this: “We’re a bit short-staffed between Tonbridge and Redhill today, so we might have to cancel some trains. We’ve arranged for Southeastern services to accept your tickets and we’ve asked for some replacement bus services. We’ll keep you posted.”

Your customer service folk who deal with the replies to these tweets are actually really friendly and helpful. They reply quickly, they apologise and use active phrasing. They don’t deserve to deal with endless angry comments from people who see them as the composers of these passive, responsiblity-ducking tweets.

I was once stuck on a badly delayed train that seemed to be stopping for every last ant that wanted to cross the track, and I tweeted you for an update. The person who replied was so nice and helpful, she kept me amused by surveying her colleagues for their best jokes and tweeting them to me.

Why aren’t these people writing the announcements? And if they are, what communication document are you giving them that’s turning their writing into such corporate claptrap?

Prime example: “Please note that this service does not convey toilet facilities or first class seating.”

Why on earth would you choose the word ‘convey’ here? I can only guess you’re thinking that fancy words like this make you sound smarter, more professional and more authoritative. If so, you jolly well f****d that up, because this isn’t even what ‘convey’ means. To ‘convey’ is to communicate – you convey information and ideas. You can’t convey a physical thing.

And spare a thought for tourists. Your trains carry people from Gatwick to the south coast. When you have loads of passengers who don’t speak English as their first language, you need to be super clear. This fancy-pants ‘convey’ message screws with them by a) using needlessly technical words, and b) being a grammatical mess.

It’s so much easier and more effective to just write with normal, natural language.

All together now: “This train doesn’t have toilets or first class seating.”

It’s not that hard. This is England – we use apologies like punctuation marks. The other day, a woman almost bumped into me in a card shop and I had to shuffle out of the way, but she was already trying to let me past. The entire conversation consisted of four words, three of which were ‘sorry’.

Saying sorry isn’t an automatic admission of guilt. And it needn’t come across as grovelling and weak. Just say sorry once, and move onto the important information. Even if something’s not your fault, you can still say ‘we’re sorry to report…’. Again, it’s just about getting a bit of empathy from customers and sounding like you care.

Just like your tweeter-responders, I’ve always found your customer-facing staff to be friendly and helpful. When you refuse to apologise for cock-ups and refuse to take responsibility, it redirects people’s dissatisfaction towards your more accessible staff. And again, you have people getting angry at frontline staff who end up taking the flak for things that totally aren’t their fault.

At Gatwick once, I saw a ticket guard taking a load of abuse from an angry customer and I remember thinking, “blimey, that guy has the calmness of a saint”. And after it was over, he immediately switched to fluent Spanish to help a family of tourists figure out whether this was their right train. You have some really great people whose jobs (as far as I can see) are made quite unpleasant because your communication is so needlessly bad.

Here’s another message that comes off as entirely negative:

It’s a tweet, but the notices you see around stations and trains are written the exact same way.

Engineering works are improvements, right? It’ll lessen people’s annoyance if you phrase it that way. You’re never going to make the whole things sound positive, because it’s still bad news. But emphasise the positives where you can. Like this:

“We’ll be making improvements to our rail network over the period of Sunday 23 December to Tuesday 1 January. Sadly this means we’ll be running a changed timetable, with no trains to London Victoria. We’re sorry for the inconvenience, but it’ll help us make your journeys better and more reliable in the new year.”

Again: taking a bit of responsibility, apologising and using active phrasing makes all the difference.

5. Sorry, but I’m just going to rant about wanky words a bit more

Alight? You cannot ‘alight’ from the front four coaches of this train? Are you serious?

I have honestly never heard anyone other than your train announcers use this word to mean ‘leave’. And I work with words for a living, so heaven knows how many Japanese families have missed their stops because they sat on one of the front four coaches and couldn’t understand why the announcer was telling them they couldn’t spontaneously combust.

It’s not difficult: “You can’t leave this train from the front four coaches because this station has a short platform.”

6. Make use of the people who write your website

This is one of the most annoying things – the writing on your website really isn’t bad. Look at this shot from your FAQs page:

This isn’t bad at all. It doesn’t have any wanky words, it’s emphasising positives, it’s using active phrases and saying ‘we’ – it’s avoiding pretty much everything I’ve been ranting about. So why such a night-and-day difference between this and your announcements? You clearly have the people to communicate bad news clearly and effectively.

So how about making that a new year’s resolution for 2019?

To end on a positive: the accolade of ‘second worst in the UK’ is within reach

Wrong. Better communication should be your first priority. This is because of a little thing called confirmation bias. You don’t get ranked as the UK’s worst unless people are really annoyed with you. And confirmation bias means that people pay more attention to things that confirm their already held beliefs and emotions.

Confirmation bias is the phenomenon that makes us think our toast always lands butter-side down. It’s what makes some of us think short people are excessively aggressive or angry. Cleaning toast off the carpet or getting yelled at by someone a foot shorter than us is annoying, so we remember it more. And we pay little attention to toast fumbles that leave the carpet un-buttered or short folk who are really friendly. Because they don’t annoy us or confirm our bias.

The categories on the Which survey (punctuality, reliability, toilets, etc.) are all things that annoy us when they’re bad. The more they annoy us, the more we remember them – and notice them more in future. it’s a snowball effect that makes the bad things more annoying and the good things less noticeable. So the way you deliver news about these little annoyances matters. If you phrase it right, avoiding all the mistakes I’ve written about here, you lessen people’s annoyance.

Less annoyance, less confirmation bias, less bad scores. Don’t get me wrong, customers still won’t be happy – nor should they be. The only way to make them happy is to give them a genuinely good service.

Delivering bad news more effectively won’t rocket you up to the top of the rankings, or even to mid-table mediocrity. But it might, just might, give you a significant boost towards the giddy heights of ‘one position above the absolute worst’.