Presenting: The scale of naughtiness 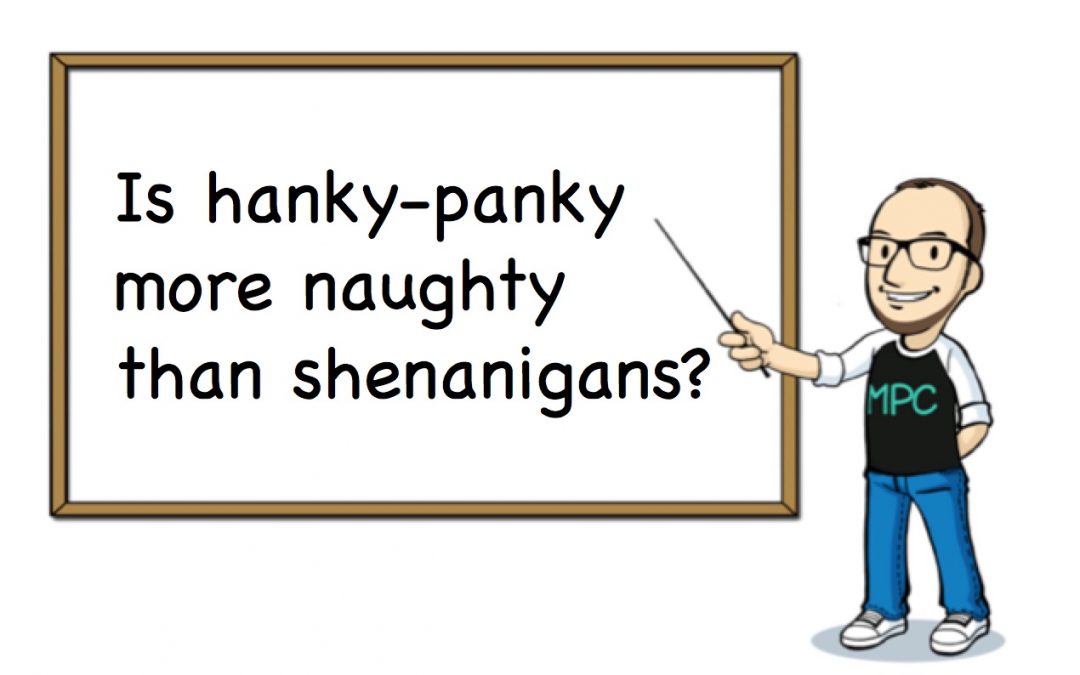 It’s been weeks since Theresa May revealed the hilariously tame act she considers to be the ‘naughtiest’ thing she’s ever done. But I still find it hilarious – especially when it’s turned into a ‘thug life’ meme.

And I think I’ve figured out why it’s so funny. It’s the word: naughty.

It’s such a childish, playful word – one that’s totally at odds with the PM’s haughty, politician’s demeanour. Would it have been as funny if she’d been asked for the most ill-disciplined thing she’s ever done? The most unruly?

The English language is always well stocked with synonyms

I remember when Jeremy Clarkson was involved in a ‘fracas’ and everyone was debating whether that was more serious than an altercation – more violent than a skirmish.

Naughtiness has even more synonyms than fracas. And yet, some of them come across as being so much more severe than others. I mean, impropriety must surely be more naughty than jiggery-pokery, right?

Let’s see if we can apply some quantitative values to this huge array of naughtiness labels. I hereby present:

The scale of naughtiness

Ranging from innocuous misdeeds to legally-dubious wrongdoings (anything likely to get you actually arrested doesn’t qualify), I’ve looked through the synonyms for the word ‘naughtiness’ and ranked my favourites in order of severity.

Defined by Google as: Playful misbehaviour, especially on the part of children.
Would accurately describe: Seven-year-old boys going through a school dictionary and circling all the unspeakably rude words, like phallus and snog.

Mischief is definitely more serious than naughtiness (which scores a 1/10), but it still has that childish quality that downplays anything it describes.

Defined by Google as: Behaviour, in particular sexual or legally dubious behaviour, considered improper but not seriously so.
Would accurately describe: Any kiss lasting longer than the briefest of moments while in a public swimming pool. (See ‘horseplay’.)

You’ve gotta love hanky-panky. It’s more specific than the rest, because it tends to refer to sex-related naughtiness – albeit in a very whimsical, rhyming way. It’s like the cute younger sibling of canoodling and cavorting.

Defined by Google as: A minor wrongdoing.
Would accurately describe: Turning without using your indicators, queue-jumping, saying the f-word on live TV.

Misdemeanour is the first word on this list that sounds like it could involve some paperwork. In the US, minor crimes can be written up as misdemeanours. But it still has that sense of playfulness about it, which makes it sound quite tame.

Defined by Google as: Secret or dishonest activity or manoeuvring.
Would accurately describe: A bouncer letting you into an exclusive event in exchange for some sneakily palmed-off cash.

Before I looked at the synonym, I would’ve given shenanigans a much lower naughtiness rating. I expected it to be no more severe than skylarking or monkey business. But its definition gives it a shady, clandestine feel that implies a shananigiser always knows they’re up to serious no good. This elevates it, to my surprise, above misdemeanours.

Defined by Google as: Unacceptable or improper behaviour, especially by an employee or professional person.
Would accurately describe: Pulling a sickie, or (in its gross form) telling your boss to f-off.

The joking stops when there’s misconduct afoot. This is the kind of word you see in employment contracts. It often applies to schools too. If, like me, you were prone to a bit of mild roguery as a kid, you’ll know this: Mischief lands you in detention, but when you’re sent to the headmaster’s office, you know you’ve overstepped the line and committed misconduct.

Defined by Google as: An act that goes against a law, rule, or code of conduct; an offence.
Would accurately describe: Parking on double-yellows, fly-tipping, legging it out of a restaurant without paying the bill.

I’ll be honest, I didn’t think the definition for this one would be so stern. I was expecting transgression to be no higher than an 8.5. But as soon as the definition mentions it includes law-breaking, it’s automatically a 10/10 – it’s promoted from naughtiness to outright criminality. Because regardless of its official definition, we generally take naughtiness to mean ‘not allowed, but not worthy of much punishment’. Misconduct might get you in trouble with your teachers or bosses, but transgression can get you in trouble with the law.

So what does the Scale of Naughtiness tell us?

Well, I think it tells us that the English language is damn silly. But that’s a great thing, isn’t it? For a single word, you can have ten or fifteen alternatives that fundamentally mean the same thing, but each have a subtly different character of their own.

I admit, it does make English a hard language to learn. But it’s also why it’s given birth to so much great art and so, so much great comedy. Because all comedy is essentially about silliness. If Theresa May was asked about her ‘most brazen transgression’, it wouldn’t be as funny.

But she was asked to name something naughty. And we found the whole thing bizarre and hilarious. And I, for one, am forever thankful to have a life and a profession based on such a silly, ridiculous language.