PRESENTING: My first ever book review (let me know if I’m doing it right) 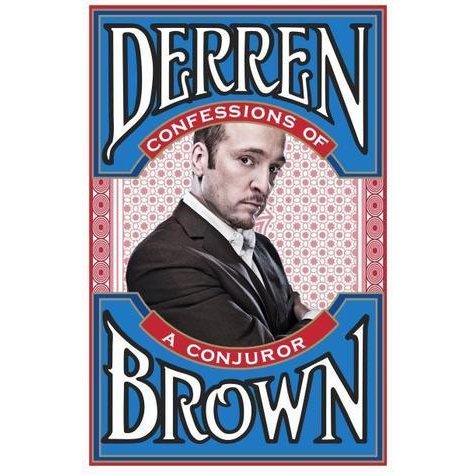 Today, I’ll be reviewing Confessions of a Conjurer by Derren Brown.

It’s out now. In fact, it’s been out since November 5th, 2009. I’ve decided that, as a book reviewer, I’m going to give each book a good while to find its place in the commercial and critical landscape before I throw in my ten penneth worth.

I’ve never done a book review before, so I’ve scoured Google to see what kinds of questions a good book review should answer. So let’s get started with the review.

Section 1: What’s the book about?

He’s the famous magician/illusionist/showman/suit-wearer/goatee-promoter. He has a wikipedia page.

No idea. Does it matter?

Derren Brown’s writing style is florid as hell. It’s jam-packed with fancy words, strung together to form a really stuffy, pretentious tone of voice. Like this:

With my right hand, I swept the deck across the table in a wide arc, releasing cards evenly to form a crescent of card backs: white borders alternating with flashes of the red-on-white rococo filigree that wrought itself into the ornamented, Bicycle backed design.

Wrought? Filigree? I’ve eye-rollingly clicked away from many a blog post after seeing these kinds of words. This quote has a readability score of 31. That’s on a par with the Harvard Law Review.

This style of writing breaks most of my rules of thumb for good writing. Rules like:

So reading even a 1,000 word blog written in Derren Brown’s style is what I, as a professional writer, would call a ‘ball ache’. Reading a full book in this stuffy, formal style is  the type of thing I absolutely hate.

Why I loved this book

In my opinion, good writing (as with many other aspects of life) isn’t about following the rules – it’s about knowing the rules well enough to see how and when its okay to break them.

And this book’s a perfect example. Breaking all the formality and readability rules works here for two reasons:

1. Derren Brown is funny. And a lot of his jokes are based on one of my favourite comedy styles – saying very silly things in a very serious voice. He talks about nose-picking, weird tabloid stories, the books he reads on the toilet and so many other fundamentally silly things. And all his funny lines land so beautifully because they’re in such stark contrast to his newsreader-slash-poetic-prose style of delivery.

2. Derren Brown’s persona demands it. He always presents himself as a very classical magician. The gentleman. The scholar. The sophisticate. It’s a persona that needs a formal style of speech. It’s how he speaks on stage, and he extends that to how he speaks on TV. So to communicate in any other way through his book would undermine the persona he makes so appealing.

Back when I was doing my Masters, I used to write comedy reviews about really bad movies. The joke was that I always approached these ridiculous B movies (think Sharknado, Mega Piranha vs Radioactive Octopus, and so on) with the method and style of a legit film critic, writing for TimeOut magazine or a some other respected publication.

It worked, because the setup was funny, but it was one dimensional. I had to use the posh, snobby writing style even when I wasn’t making jokes, which always felt redundant and laboured. But with Derren Brown, his smarter-than-thou writing style works whether he’s joking or not, because it’s all in service to his general persona.

The importance of knowing why you choose each word

The lesson here is that you should always know why you’re writing in a certain style. Because your motives will go a long way to determining how you come across.

Writing about selfies and Twitter ‘cos you want to ‘connect with millennials’? You’ll come across like you’re middle-aged and trying way too hard.

Writing in plain English because you want to be clear and concise? You’ll come across as someone who wants to make life easier for their readers.

In Derren’s case, he’s chosen a very wordy and florid style. But he’s done it for very specific reasons – reasons that serve the reader’s entertainment, rather than his own aggrandisement.

All the words he uses serve a very clear purpose. The fancy words are mostly specific verbs and nouns. Although he’s writing in a formal way, there’s none of the fluff you see in corporate writing. There’s no ‘in conjunction with’ or ‘with regards to’ – he’s only breaking the rules when there’s something to be gained by it. So it works.

Section 4: Would you recommend this book, and why?

Yes. Because I liked it.

Section 5: What other works by this author would you recommend?

I dunno. Haven’t read any of them.

Section 6: Where can your readers find more of your book reviews?

I’m thinking this will probably be my only one. For a while at least.