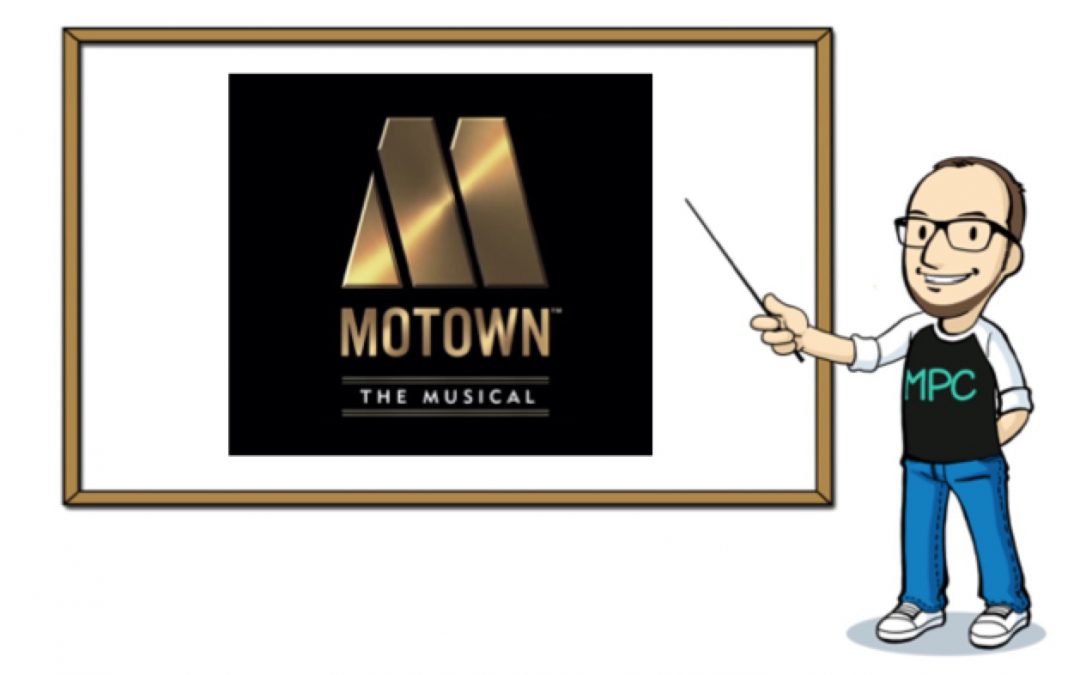 Last weekend was my 31st birthday, so my fiancée got us tickets to Motown the Musical at London’s Shaftesbury Theatre. It was really good. But it could’ve been great, were it not for one horribly written poster.

And that’s not just me being pedantic and exaggerating – this poster genuinely had a big effect on the show. So I’m gonna do a quick autopsy of this poster, and use it to explain some common writing pitfalls. 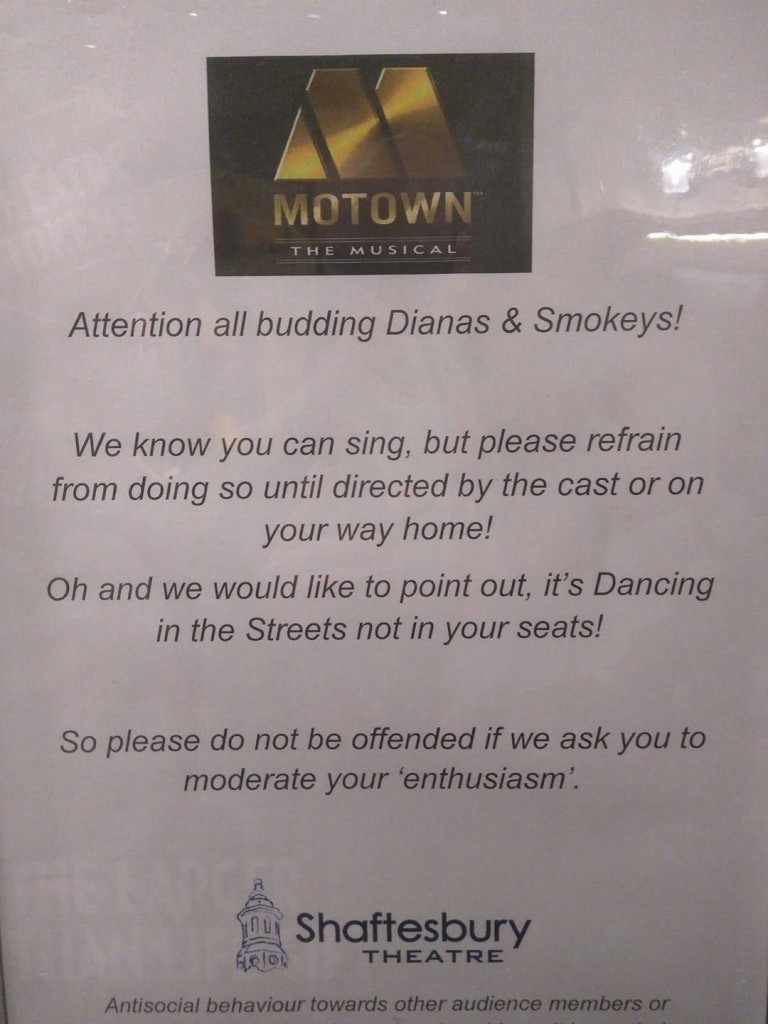 So how did this harm the show?

These posters were all over the theatre, and they came across as basically a sit down and shut up warning.

It makes sense that they had specific bits where the audience could get involved, and that the other bits needed to be more of a standard theatre show. But this poster did a really bad job of getting that message across.

So when the performers did gesture for the audience to sing, dance and clap along, only half of them hesitantly got up to boogie. And when they noticed the other half were still sat down, they got all shy about it and sat back down with them.

These were the moments when the show should’ve really taken off and become a proper celebration. But the show just never managed to cut loose and build the party atmosphere it needed. All because of this damn poster.

So where did this poster go wrong?

We need a poster that politely asks theatre-goers to sing and dance only when the cast invites them too. Otherwise they’ll be singing over the performers and blocking the views of people sitting behind them. But we want to keep a playful tone that’s in the spirit of the show.

Here’s why this poster missed the mark so badly:

It’s lost sight of its purpose

The purpose of this poster is to inform. But it’s putting all its effort into being entertaining.

The main message (please don’t sing and dance until the cast invite you to) is in the middle of the second sentence. But its getting drowned out by the start and the end of that sentence, which leaves you with the message: you can’t sing, so please shut up until you leave the theatre.

How they could fix it: The most important point needs to be the most prominent one – please don’t sing and dance until the cast invite you to. It could be the title, the opening line or just the most graphically noticeable bit. Anything that makes sure it’s the main thing people take away from reading it.

The lesson: Always base your content, tone and structure on your writing’s main purpose. If it’s meant to inform, then that always comes first.

It’s trying really hard to be funny. And failing.

Not only is it unfunny, it’s trying to force its jokes down your throat with loads of exclamation points. This just makes it seem really desperate and a bit shouty. And it further buries the main point.

How they could fix it: There’s lots of ways to be playful without making naff jokes. They could frame it as a playful warning sign, saying something like: Warning: this show contains seriously funky beats that may cause a strong urge to boogie. Personally, I wouldn’t go that jokey, but it would still be a big improvement.

The lesson: Comedy isn’t universal, but tone is. So aim to raise a smile rather than a laugh. And never use punctuation marks to make something sound more lighthearted – it doesn’t work.

Its tone is all over the place

It’s trying to be playful, but it’s littered with really formal-sounding words like refrain and moderate. It also doesn’t use contractions – ‘do not’ sounds really stern, compared to the more natural ‘don’t’.

How they could fix it: They need to write more naturally, more like you’d speak. And they need to replace formal-sounding words with more natural alternatives.

The lesson: Nailing the right tone needs attention to detail. Choice of words and punctuation sound like little things, but they can throw your tone totally off if they’re not consistent.

It comes across as really patronising

‘Budding’ is a patronising word. Try calling a med student a ‘budding doctor’. Paired with we know you can sing, the first couple of lines come off as saying: You think you can sing, and that’s adorable. But you can’t, so don’t make anyone else suffer it.

And the bit at the end – moderate your ‘enthusiasm’. That’s a problem. When you put something in single quote marks like this, you’re saying it’s a euphemism for something you don’t want to say explicitly. (Like ‘spending a penny’ or ‘left-handed web surfing’.)

So if it’s not to be taken literally, what does moderate your ‘enthusiasm’ mean? Shut the f**k up?

This strikes me as an error of editing and sign-off. It’s like one person wrote it, thought “that’s brilliant” and stuck it straight on the wall. If there was someone above the writer to sign it off, either they didn’t notice how patronising it was, or they didn’t feel they could mention it.

How they could fix it: If you’re going to give someone a label, make it a desirable one. Motown lovers would be far better than budding Smokeys. And the final line is missing a chance to explain the reasons for the instruction. For example: If we ask you to stop singing and dancing, it’s just to make sure everyone can see and hear the show.

The lesson: Always get a second opinion. This is why we use editors, sub-editors, co-writers, proofreaders or even just hand it to a mate and ask “does this come across alright?”

So how does that look when we apply all the lessons?

It’s not easy to hear Motown’s finest work without swinging your hips and singing along. But we need to make sure everyone can see and hear what’s happening on stage.

So we have specific parts of the show when the cast will invite you to sing, dance or clap along. When that happens, feel free to join in the party.

That’s my first draft. It’s far from perfect. The last line definitely needs some work. So that’s why I always have a co-writer or an editor to look over my work and point out ways to improve it.

I hope they change the poster

I really do. The show was so damn good, but the audience just couldn’t quite release the handbrake.

The ironic part is that the show itself was beautifully written. It was funny, heartfelt, politically aware but not preachy, and the performances brought it all to life so well. The lady who played Diana Ross had incredible range and the lad who played young MJ was just brilliant.

So it seems absurd that four little sentences on a sheet of white A4 could have such a profound effect on the experience.

But that’s the power of writing. And that’s why I love my job so much. mpc