The cracks in Oasis Drinks’ ‘refreshingly honest’ approach: MPC’s words of the week 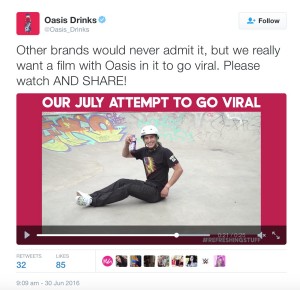 Dear, oh dear, Oasis Drinks. What was this tweet all about?

A self-confessed ‘attempt to go viral’ using a promoted tweet for a totally bland video ad that scores a paltry 32 retweets? Palm all the faces.

As one of the comments says: “Even the walls are cringing. Please stop.”

I’ll leave it to a social media expert to list all the missteps here on the road to virality. I’m more interested in this Oasis brand idea of ‘refreshingly honest’. It seems to be producing some really nice language, but when it misses the mark, it hits the deck hard.

The difference between honesty and ‘honesty’

From looking at the rest of the Oasis Twitter feed, I think they’re doing a really good job. They’re chatty with their customers, they’re playful and they seem, well, refreshingly honest.

Then there’s those clever ads they ran wishing everyone a merry xmas in July: “First xmas ad of 2016. Take that, advertising!”

So how did they manage to hit such a bum note with their ‘let’s go viral’ tweet?

Well, obviously the video wasn’t viral material. It was contrived and nothingy. But the words are a problem too – “Other brands would never admit it, but we really want a video with Oasis in it to go viral”.

Firstly, reading ‘other brands’ just reminds me that this is a brand, rather than a person, talking to me.

And it’s too self-congratulatory for me. There’s something inherently suspicious about anyone who makes a point about how honest they are. So actively inviting praise for it (and implying that other brands are dishonest) just sounds…dishonest, I guess.

It’s breaking the golden rule of showing, not telling. When I see the Oasis folks on Twitter having playful chats with average Joe tweeters, it feels sincere – like the words are coming direct from a single person. But in the ‘let’s go viral’ tweet, it feels like the words have been written by a committee, based on focus groups and market research. It makes me feel very ‘marketed at’ – the exact opposite of what they’re going for.

The difference between refreshing honesty and cynical-sounding honesty

Here’s one other line from Oasis that just doesn’t sit well with me: “It’s summer. You’re Thirsty. We’ve got sales targets.” 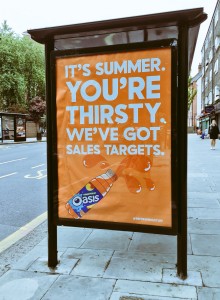 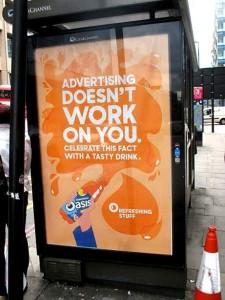 From a quick Google around, it looks like this ad was pretty well received, but I don’t think it comes across as ‘refreshingly honest’ at all.

It sounds too cynical.

It comes across to me as: “Oh, just cut  the crap and buy our drink. Stop making out like you’re such a valuable customer.”

I’d be totally onboard if it was just as frank, but a bit more playful. Something like: “You’re thirsty. We sell tasty drinks. Coincidence?”

But the ‘sales targets’ ad seems like it should be from a totally different campaign to this ad, which I love: “Advertising doesn’t work on you. Celebrate this fact with a tasty drink.”

I think this works beautifully. It’s playful, original and doesn’t sound cynical at all.

The idea behind ‘refreshingly honest’ is clearly to counter millennials’ apparent resistance to advertising. Supposedly, we kids like our brands to be more ‘humanised’ and honest.

There’s plenty of truth in that, but it seems that only leads to conversations like this:

“Kids want us to be more honest. They don’t want to feel like we’re advertising to them.”

“Okay, so how do we advertise how honest we are?”

Writers like me are often guilty of beating people over the head with the ‘show don’t tell’ rule, but it really is so important.

Oasis have a Twitter team and a bunch of ads that really do come across as refreshingly honest. But their ‘viral’ tweet and ‘sales targets’ ad slap me around the face and remind me it’s all just marketing.

So what’s the lesson here?

If you want to be perceived as honest, be honest.

Don’t invite praise for being honest. Don’t be honest to the point of cynicism. And whatever you do, don’t make a point of how much you want to sound honest. (“Other brands would never admit it.”)

As Nike would probably say:

Want to come across as honest? Just do it.