Leveraging holistic solutions disruptively: Why not all buzzwords are created equal 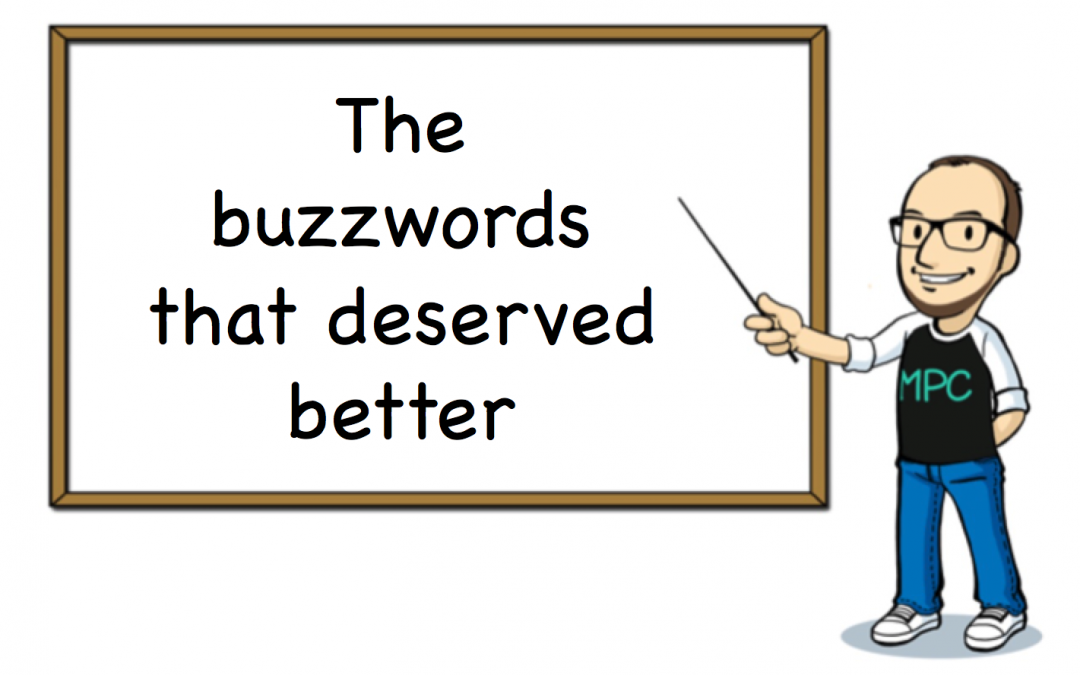 I spend a lot of time reading strategy documents and brand guidelines. So I see my fair share of buzzwords. You might think my default reaction would be an eye-roll. It often is. But not always.

Sometimes I feel sorry for certain buzzwords. They were wisely chosen words once. They deserved better than to be branded as empty corporate speak. Let’s have a look at where the dividing line is.

Some buzzwords are born from a right-click-synonyms approach

‘Leverage’ has a specific use in the financial industry. But outside of that, it’s just a haughty synonym for ‘use’. Why use your new state of the art research facilities when you can leverage them, am I right?

Lazy students know this trick. You’ve got a big essay due in later today, but instead of studying last night, you were taking in the local culture at a reasonably priced drinking establishment. No worries. Just bang out something that sounds halfway passable and then make use of the MS Word synonyms function. Change every ‘also’ to a ‘furthermore’, every ‘so’ to a ‘therefore’ and boom – your unresearched ramblings at least sound like something academically sound.

This is how the worst buzzwords come to be. Why would you want a workload when you can have ‘bandwidth’? Only a dogsbody would ‘agree’ – the stakeholders are all ‘in alignment’. Making sensible decisions is kinda outdated – in this firm we ‘implement best practice’.

The key thing here is these abstruse words and phrases don’t mean anything different to their everyday alternatives. They just sound more technical. And not all buzzwords are born this way.

Some buzzwords are born of genuinely elegant phrasing

I’ve written before about my sympathy for the plight of ‘holistic’, so let’s choose another example here.

Everyone, it seems, hates the term ‘disruption’. ‘We’re a disruptor brand’. ‘We’re looking to disrupt the market’. It’s on pretty much every list of the worst buzzwords of 2019. We know why it’s so disliked. It’s disliked for the same reason all buzzwords are disliked: businesses overuse it purely because they think it sounds impressive.

But that doesn’t put it in the same category as the right-click-synonyms buzzwords – the ones that were nothing but needlessly florid vocab-tweaking from the start.

Harvard Business School Professor Clayton Christensen, I’m told, was the creator of the term ‘disruptive innovation’. He used it to explain “why upstart enterprises drive better-established companies out of business.”

The definition we use now is much broader than its original one. But it still makes sense. If you set out to ‘disrupt’ a market, you’re saying you don’t want your products or services to just slide comfortably into the market’s established status quo. No, you want them to challenge the very foundations of that status quo. You want to, well…disrupt it.

‘Disruptive’ covers in one word what you might otherwise need a sentence or two to explain. And it’s not an obscure word – I learned it the first time my parents asked my teacher what my behaviour was like in class.

And there are plenty more terms we now consider buzzwords that were, in their early days, quite elegant, succinct ways of describing larger ideas. ‘Low-hanging fruit’ was quite evocative. ‘Best in class’ was practical and punchy. And I still think ‘going forward’ is subtly distinct from ‘in future’ and shouldn’t have been tarred with the buzzword brush.

Buzzwords are born in different ways, but they all die the same way

Remember the doge meme? Man, I loved that meme. It was irreverent, silly and genuinely funny in its pomp.

But memes, like buzzwords, have a shelf life. And we know exactly when doge died. In 2013, a republican congressman tried his hand at creating his own doge meme. It was a sombre moment. He got the broken English wrong, it was self-promoting and oh so very unfunny.

In that moment, everyone knew doge was over. The Huffington Post even ran the headline: ‘GOPers ruin beloved internet meme’.

Memes die and words become buzzwords when they start being used purely to sound cool, clever or ‘cutting edge’, by people who are clearly neither of these things. Like a schoolteacher telling their kids that Shakespeare had ‘sick rhymes’.

This is how a smart use of words gets turned into a buzzword – when business folk throw it into their strategy documents not because it’s an apt description of the ideas they’re trying to get across, but because they just think it sounds more impressive.

And that’s not the word’s fault.

Don’t get me wrong, you’ll still never see me writing about ‘holistic, disruptive strategies’. They’re still buzzwords and people still react to them as such. So I don’t use them. But that’s not my point.

My point is that, as a writer, people expect you to roll your eyes and despise any buzzword you see. But sometimes, when I’m expected to express my distaste for them, I find myself looking at some buzzwords and thinking, ‘well, taken on its own merits, that’s actually a pretty decent turn of phrase’.

So I say this: there’s no shame in giving a buzzword a nod of respect as you hit the delete key.

Sure, for the ‘leverages’ and ‘bandwidths’ of this world, you’d be well within your rights to delete with a knowing shake of the head. But for the ones that entered this world as a neat little bit of writing, as a succinct expression designed to save us time, we should have more respect than that.

We should hit delete with a solemn sigh. We should send these buzzwords off into the ether with a momentary recognition that it wasn’t their fault what they became. And hope that, as they rest in peace, they know they were born the right way.