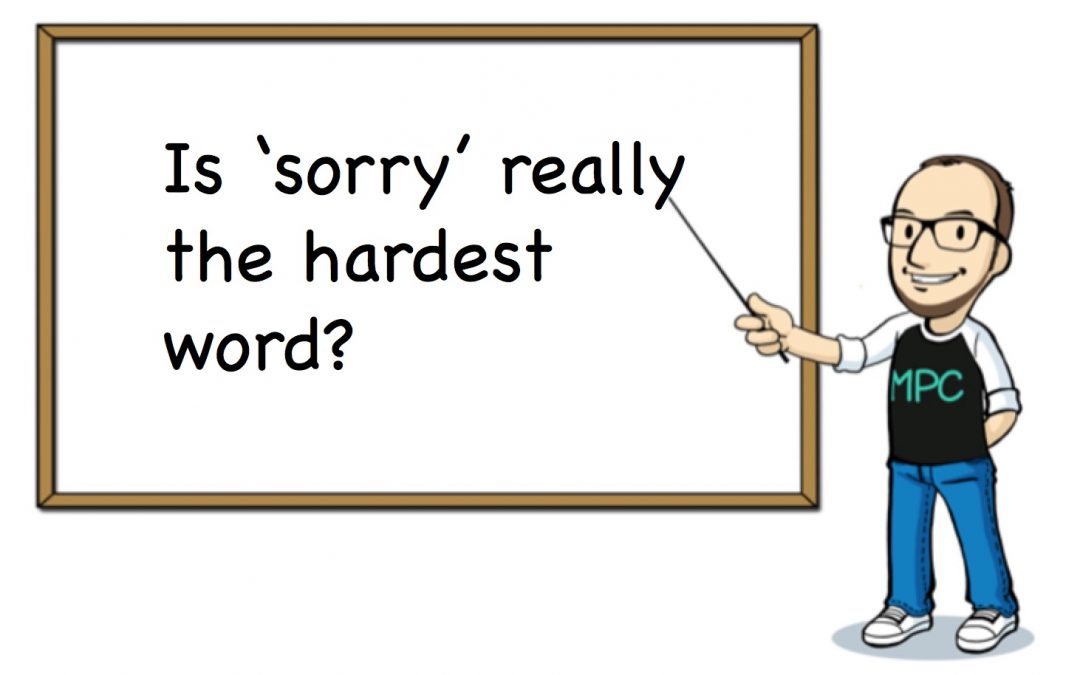 I find apologies fascinating. Done well, they can turn a negative into a positive. But get them wrong and you’ll just dig yourself an even bigger hole.

I noticed an especially interesting one today. And I reckon we can pluck out some valuable lessons from it.

PeoplePerHour connects businesses with freelancers. And they recently ran a tube ad with this leading line:

You do the girl boss thing. We’ll do the SEO thing.

Yikes. I could write a whole blog about how this ad went so wrong and ended up sounding so patronising and sexist. But that would just be a needless layer of theoretical analysis. Let’s be honest, you only need to look at this ad to see what’s gone wrong.

Nope, I’m more interested in the apology that followed. A cursory glance at Twitter is enough to show you the apology isn’t hitting the mark much better than the original ad did. And I can see exactly why.

A couple of quick notes first though:

Okay, let’s dive into the mixture of good and bad that made this apology a bit of a dud:

“In light of the criticism surrounding our recent advertising campaign…”

Okay, they’re putting their own backs up against the wall with the very first line of this apology.

It’s not person-to-person, it’s not using everyday language and it’s not getting straight to the point. The result is that it establishes a corporate tone of voice. And that’s a problem.

This makes us think what we’re reading is not so much an honest apology as an attempt to quell a PR problem. It’s a business looking for the right words to make people stop criticising them. And that makes us dubious from the get-go.

And it doesn’t get much better as you read on. Any line that starts “At PeoplePerHour it is our mission to…” just sounds like it’s been copy-pasted from a strategy document. It sounds patronising, which is the very charge they’re trying to fend off.

Good: “We messed up”

This isn’t in the actual apology – it’s the opening line of a tweet that gave the link to the apology. And it’s good.

‘I messed up’ is what a person would say – not a business trying to PR their way out of a cock up.

It’s the opposite of the line we looked at before. It’s person-to-person and gets straight to the point with everyday language. Immediately, we feel like we’re dealing with people, rather than a corporate entity. We all make mistakes. This we can empathise with.

A good apology should always show you understand exactly what you’ve done wrong and why people are unhappy about it.

I’m not sure this apology really does that.

It’s tripping over itself to say that their patronising ad doesn’t reflect their view of women’s business skills. But this seems to be missing the larger point. Later on, they say:

“The idea behind the ad is that busy business owners can hire freelancers to help with tasks they may not have time for.”

“We have thousands of experts on our website and we recognise the breadth of skills that both genders possess.”

This begs the question: why was the advert even directed at women in the first place? Why is it ‘girl boss’ instead of just ‘boss’?

It’s all a bit muddled. And it leaves me with the impression they haven’t really paid attention to the criticism and fully reflected on what’s gone wrong.

Bad: appearing to shift the blame

I say ‘appearing’ because they do take responsibility in the apology overall. But the little reference near the end – “This advert was produced by an external agency”? No, no, no.

Blaming it on someone else (even in part) is a very quick way to annoy readers of an apology. And the ‘outside agency’ defence is an especially bad way of shifting the blame. You booked the agency. You signed off on their work (or, even worse, didn’t bother to check it). Either way, the buck stops with you, Bucko.

As well as the apology on the PeoplePerHour blog, we have a separate one that went out by tweet as an image.

And the tweets that introduce these two different apologies have multiple apologies in them as well. Like this one:

“We’re sincerely sorry for any offence that this ad had caused. The ad is in the process of being changed. We would like to formally apologise and address some of the criticism here:”

This probably sounds like a harsh criticism – saying an apology is too apologetic. But in practice, you never need to say ‘sorry’ more than once. Any more and it just comes across as grovelling.

What’s of much more value is saying, concisely and just once: what you did wrong, that you’re sorry for it, and what you’re doing to fix it.

This whole paragraph of the blog apology is really interesting:

“The term Girl Boss was coined by the Founder of Nasty Gal Sophia Amorusu, one of the most successful entrepreneurs of our time. Girl Boss is a well-known buzzword and the intention of using this term was to empower women, not condescend.”

This could’ve come across really well, if written differently. A quick explanation of what went wrong is a good thing to include in an apology. They used a term they thought had positive connotations, but it wasn’t as well-known as they thought and, to the unfamiliar, it comes across as having negative connotations. That would’ve been a useful addition.

But in its current wording, it sounds (at least to me) like: I’ll have you know, ‘girl boss’ is actually a well-known saying and the woman who came up with it is a really successful business woman, so there – feel a bit silly now, don’t you?

Let’s not just sit on the sidelines and throw rotten fruit at a business that just made an honest mistake. Let’s try to be helpful.

Here’s an example of the kind of apology I think would’ve worked better:

We really shouldn’t have signed off our ‘girl boss’ ad. We should’ve noticed how badly it would come across.

A number of you have told us it comes across as patronising and sexist. And you’re absolutely right.

We’re really sorry for putting such a bad message out there. Our business is simply about finding the right person for the job. So an ad that separates people by gender should‘ve been a total non-starter, even if it hadn’t been so badly worded.

We’re working on getting the ad changed, asap. (And figuring out how we let it get signed off in the first place.)

Thanks to everyone who flagged it up. We promise we’ll do better in future.

What do you reckon?

Feel free to tell me if you disagree. I’m not saying for a second that writing an apology is easy – just that there are very well established pitfalls you need to avoid.