ASMR – The sad story of CuteBunny992 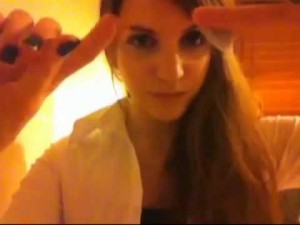 “I am very shy, really. I don’t like being in front of the camera too much and I don’t feel very good about myself. But I did this for you.” – CuteBunny992

Speak to anyone in the ASMR community and you’ll hear some really nice stories about kind, caring people who come together to relax and be there for each other. But like any online community, it has its dark sides.

Last year, I interviewed Tony ‘ASMRer‘ for a feature I was writing for Gay Star News about trolling on YouTube. While I was researching, I kept hearing this name ‘CuteBunny992’.

From everything I read or heard, it seemed that CuteBunny992 was a very popular member of the ASMR community but, some time in 2012, she was trolled, hacked and harassed off of YouTube, and disappeared without saying goodbye. Her videos exist now only on ‘fan channels‘ uploaded by YouTube users who downloaded them from her original channel.

The details of her disappearance were sketchy at best, so I was intrigued to find out what could be learned from her story.

(if you’re reading this and thinking ‘what the hell is ASMR?’ then my quick-fire lesson will bring you into the loop in just a couple of minutes and the video below will show you what CuteBunny992’s videos looked like)

CuteBunny992 was a young Greek woman called Marianne (I use the past tense in a YouTube pseudonym sense here – obviously she still is a young Greek woman), aged 20, although she said many took her for being younger due to her petite appearance. She did ASMR monologues and role plays in English and Greek, as seen in the above video. From the videos that still exist, she seems friendly, genteel, unassuming and generally just a really likeable young woman.

In a video entitled ‘I am back‘, she explains that her channel was hijacked, her videos deleted and malicious ones uploaded in their place. It’s a really intriguing, albeit sad, video. She seems very much hurt by the whole affair, saying the uploaded videos attempted to make her look like some kind of child abuser. As a young woman planning a career in child care, this must’ve been profoundly hurtful. But, in the video, she declares that she is now back in control of her channel and that all is well again.

I am told this was the last video she ever uploaded and the last contact she had with anyone in the ASMR community. I haven’t yet spoken to anyone who has had any contact with her beyond this point. She just disappeared.

“I cried. Because I saw all the things I had done just flying away for no reason” – CuteBunny992

One person who is always plugged in and clued up one what’s happening with other ASMRtists is the water-whisperer herself, Ilse. I had a chat with her just before Christmas and got her take on the CuteBunny story. Here is what Ilse told me:

“CuteBunny, man I miss her so much!”

“I was in really close contact with her because everyone was wondering what was going on. I spoke to CuteBunny a few times through Facebook, just to keep an eye on her, because I knew a lot of people liked her. I loved her – her videos, her accent, just her beauty in general. She was so elegant and so feminine.”

“When she got hacked, it was horrible. I know her story because she told me what happened. But after she disappeared, I could never get hold of her any more because all of her channels were shut down and her Facebook account was gone.”

“A person hacked into her channel – one of her viewers. He basically controlled her channel and kept trying to make fun of her. Then he decided to give her channel back, but obviously he still had all the information and he knew how to crack her computer.”

“So he gave her channel back and that’s when she made the video like ‘hi guys, I’m back’ and she explained the story of what happened. That wasn’t the entire truth, by the way, but she didn’t want to be a pain in the ass by sharing so much negativity on her channel.”

“After that, he hacked her again, and that’s when she never came back.”

So it turns out Marianne was actually hacked twice. From seeing her last video, the way she stops to catch her breath a couple of times, looking almost tearful, it does make sense that a second attack would be enough for her to shut everything down and walk away for good.

“People have been through worse things in life than what I’ve been through. I am very blessed, to have a really nice life with people that really love me.” – CuteBunny992

It does seem though that maybe it wasn’t just one malicious viewer in a sea of adoring fans. One of the fan channels that still posts her videos has the username ‘belaghoulashi‘, a user with whom I had a very brief YouTube messaging conversation back when I was working on the GSN feature. ‘Belaghoulashi’ explained that the hijacking of Marianne’s channel was compounded by some hurtful comments posted to the malicious videos:

“It was just one person being really annoying – aggressively so, stalking and actively trying to humiliate her. There were a small number of people – worthless, useless, feral cretins – who encouraged and applauded him in this via comments on her channel when he still had control of it.”

“Between the stalking and the truly neanderthal comments of those supporting it, she just decided it wasn’t worth the trouble any more.”

This was all ‘belaghoulashi’ could tell me. I am assuming that ‘stalking’ is used here to mean ‘trolling’ because I have heard nothing to suggest that the attack on Marianne took place anywhere but online, but I could be wrong. Perhaps some members of the community who witnessed the changes to her hijacked channel can shed some light on it. Either way, it appears to come back to the same thing – the same thing that seems to blight any well-meaning online community. Trolling.

When I spoke with Tony about the trolling comments he gets, I remember thinking that here is a guy who will not be easily deterred by trolls – he is the type of person who is happy to chat to a journalist about it, have his face and words displayed in a feature and enjoy the fact that it flies defiantly in the face of the malicious minority who post abusive comments on his channel.

It would seem fair to assume that Marianne was not the type to come out fighting in such a way, which was perhaps a part of her charm. There was a ‘get to know me’ video in which she said, in that soft and harmless voice, “I’m not a very strong person – you can manipulate me easily”. The hacking ordeal would later begin when she unsuspectingly clicked a link that arrived in her inbox.

So perhaps Marianne was just unfortunate enough to display all the kinds of signs that draw in the trolls – she was young, pretty, modest, popular, totally kind and trusting to a fault. It would be a sad conclusion to draw, but it may be the correct one.

If you take a look at the types of characters (especially female characters) who gather large followings through such open, independent platforms as YouTube, there aren’t many that share such a benign, vulnerable persona as CuteBunny did. There are many who are kind, compassionate and gentile but mostly they still have a steely resistance to trolls and critics – the strength to come out fighting if required. Ilse would be a perfect example of this.

Perhaps the lesson here is that trolls, like electricity following the path of least resistance, will gravitate to those who appear least resilient. It’s a cruel irony that ASMR, by its very nature, is hugely populated by people looking for relief from stress, for emotional connection and for people to empathise with, just like Marianne.

Could CuteBunny have been better protected by the community? From what I’ve heard, probably not.

“This community is very strong and it’s not a fake one. We truly appreciate each other.” – CuteBunny992

In the digital graveyard of defunct YouTube channels, there are probably millions of CuteBunnies who reached innocently out into the ether for a connection and a community, but weren’t equipped to cope with the ubiquitous minority who will fire abuse at anyone who shows the slightest sign of vulnerability. Sometimes it only takes one bitter, persistent person to do the required damage.

But who knows what the future holds?

ASMR is still a burgeoning, niche community that is easily within typing distance of anyone who seeks to abuse and harass its brightest stars – although there will always be the defiant fans who step up to the comments box and return fire against the trolls.

Perhaps in the future, ASMR will jump fully into a commercial sphere and blossoming young ASMRtists will have celebrity-level protection against cyber-attacks and personal harassment. Maybe Marianne will just pop up again on YouTube one day and pick up where she left off.

Until then, we can only cobble together what little bits of information we have about her and learn from it as best we can. But whatever the lesson here is, it isn’t a happy one.

As sad a thought as it is, perhaps the lesson here is one we already know – that when you interact with strangers online, no matter how trustworthy they may seem, you must always have that little caution fairy on your shoulder, grabbing your index finger every now and then to say “wait, should we click this? Can we definitely trust this person?”

It’s not nice to think that Marianne’s cautionary tale can only reinforce the kind of caution we already know (and that surely she already knew, though she was perhaps blinded by her own good nature). But the fact is that good people are natural targets for people who like to bully, troll and mistreat.

“If you are a bad person, eventually you will pay. Everybody knows that.” – CuteBunny992

Marianne did frequently reference a friend of hers, presumably a techie-minded friend who helped to get her channel back under her control. It could be argued that an additional lesson here would be that all cyber-techie ASMR fans should make themselves known as such in the community and offer assistance to anyone under a similar hack attack.

Unfortunately, this just loops back to the underlying issue. Like Ilse said – how can you know who to trust?

To end with some optimism though – in her videos, Marianne always appeared overwhelmed by the pleasant reaction and gratitude she got from her subscribers (although I never found out how many she actually had). Wherever she is now, if she is still browsing YouTube every now and then, she will surely be very happy to see that people are still watching her videos and saying how much they miss her.

I suppose that is just further testament to the strength of little online communities like ASMR – that their most selfless members are still loved and supported, even when they are long gone.

“So that’s it, I’m back […] I will straightaway start thinking again about what I will upload next to relax you again. I send you all my love, from CuteBunny992 to you. Bye.” – CuteBunny992